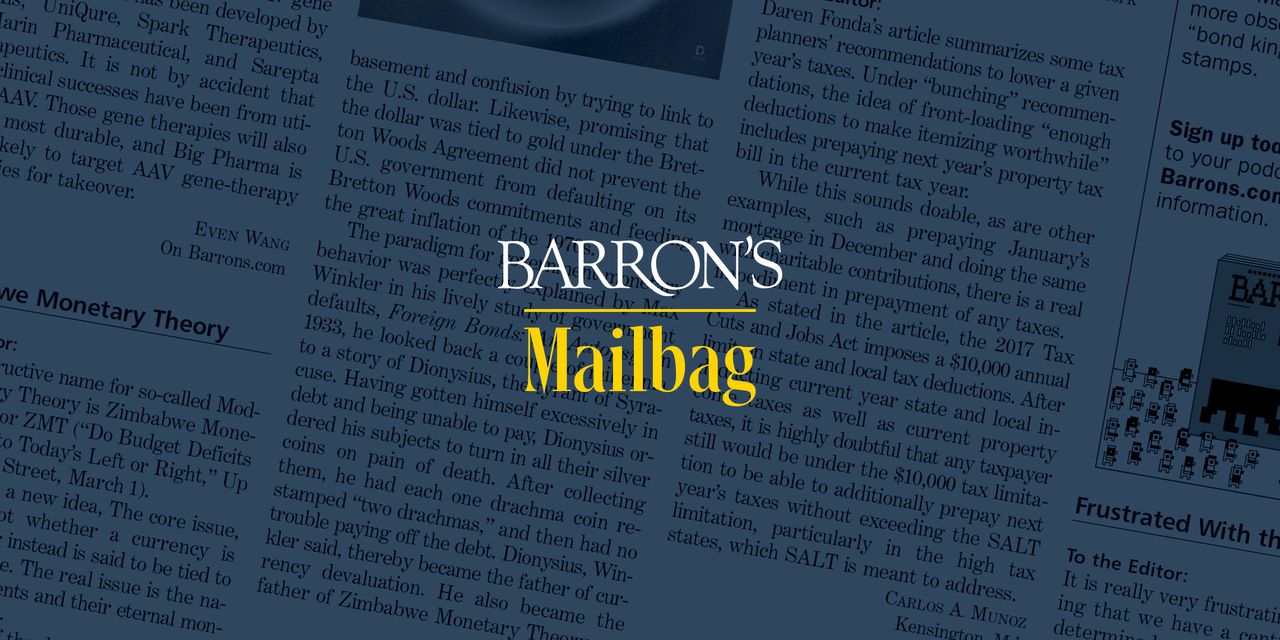 To the Editor:
Excellent article on where the pros are looking to place their bets (“Medicine’s Golden Age,” Healthcare Roundtable, Sept. 24). So many seem to take for granted the miracles introduced to the world by the U.S. health-science industry. Those of us with life-threatening illnesses are so grateful on many levels to this industry for its work.

Politicians, stay out of the way.

To the Editor:
Given eternally low interest rates and bond yields, pharmaceutical companies have to revert at some point from present low valuations. AbbVie is an exceptional deal at the moment. I’m happy to own Merck, Eli Lilly, Pfizer, and Amgen. But the most amazing value play is Viatris, with a price/earnings ratio of less than four. With the merger of the old Upjohn and Mylan less than a year old, Viatris has had two excellent earnings reports; makes Viagra, Xanax, Lipitor, etc.; is generating great cash flow; has a 3% yield; and in November will issue its strategic plan with forward guidance that should provide a catalyst for an upward move in the price. Get in now, while the getting is good.

To the Editor:
China’s return to a full command-and-control economy will dull the creative minds of the best, and those people will again want to leave China to pursue their dreams of creating companies and great wealth (“Markets Shrug Off China and Focus on Easy Money Instead,” Up & Down Wall Street, Sept. 24). That will result in greater returns to the West that result in significant wealth creation outside China. The Deng Xiaoping era allowed dreamers like Jack Ma and others enough freedom to become enormously wealthy. That is all gone now.

To the Editor:
Yes, China’s economy is overexposed to real estate and construction (“China Faces a Reckoning With Evergrande Crisis. What Could Come Next,” Sept. 24). But the U.S. has had a very similar “growth model” for about 25 years now. Basically, the U.S. authorities consciously continue to inflate housing prices. Doing so allowed massive equity-extraction by refinancing, until the 2008 bubble popped. Those equity extractions fueled debt-driven consumption spending.

After 2008, the authorities decided to reflate housing by keeping interest rates suppressed. In response to the pandemic, the Federal Reserve has taken this policy lever to extremes, presumably to encourage growth in mortgage debt. As money is created only by creating debt (one man’s debt is another man’s asset), the Fed is intentionally creating a real estate asset bubble as a means of money creation. And thus, its strategy directly works against the interest of housing affordability. The more that households are placed into ever-more extravagant mortgage debt, the more the Fed’s policy is “working.” Most states love the unaffordable housing, as their propertytax revenue keeps growing.

Both the U.S. and China are using real estate to prime the economic pump. Both are creating massive, unintended, and detrimental consequences. China at least has a real manufacturing sector to fall back on, once its real estate bubble pops. What does the U.S. have to fall back on? Burger joints and coffee shops?

To the Editor:
The real value in electric-vehicle batteries will be in exchange/swap, or E/S, transactions for the installed base of light and heavy electric vehicles (“EVs Could Jump-Start Li-Cycle’s Stock,” Sizing Up Small-Caps, Sept. 24). The firms that control these transactions will control the recycling marketplace. Some of the marketplace will lease batteries. Note that batteries can often be repurposed without being recycled, as well as restored to retain a majority of their original capabilities. The recycling business model will not be the future of the life cycle of EV batteries.

To the Editor:
Volkswagen Group, ticker VWAGY in the U.S., is an absolute long-term great stock to hold (“Volkswagen Is Pulling Ahead With Its Electric Vehicles. That Could Boost the Stock,” European Trader, Sept. 24).

This article makes the case that I have been adhering to for a long while, and what most analysts seem to believe. VW has the global footprint and large-scale wherewithal to dominate going forward, and by adding an affordable electric vehicle to its lineup for less privileged buyers, it will win big in many countries and wherever people can’t afford $40,000 to $80,000-plus EVs.

Send letters to: mail@barrons.com. To be considered for publication, correspondence must bear the writer’s name, address, and phone number. Letters are subject to editing.