Levy
Home Pharma Investors Africa’s shot at local pharma production – How we made it in... 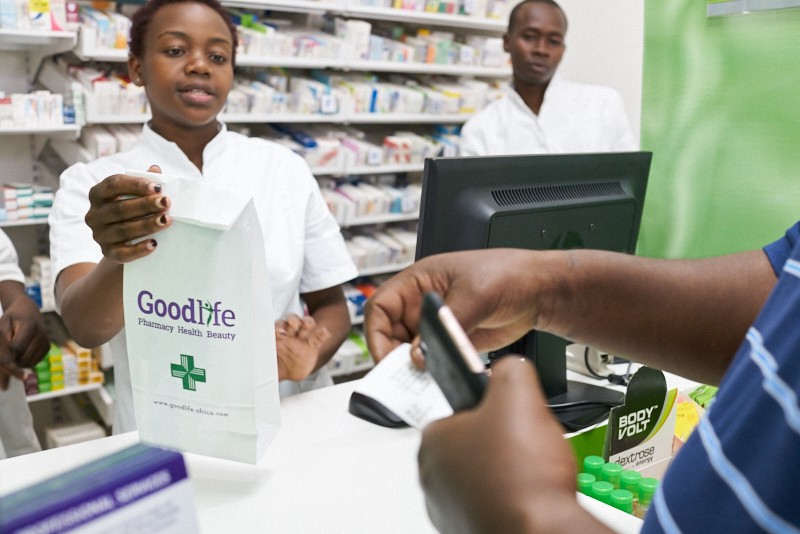 Goodlife Pharmacy has a presence in both Kenya and Uganda.

During the Covid-19 pandemic, small pharmacies and large medical stores in Rwanda ran out of stock.

In South Africa, it became nearly impossible to fill prescriptions for psychiatric drugs and oral contraceptives.

In Kenya, oncologists complained about challenges treating their cancer patients.

And in Nigeria, stocks of treatments to manage chronic illnesses, including HIV medicines, dipped critically low.

Margaret Ilomuanya, editor-in-chief of the Nigerian Journal of Pharmacy and a senior lecturer in the Department of Pharmaceutics and Pharmaceutical Technology at the University of Lagos, doesn’t blame the foreign governments that halted their pharmaceutical exports during the pandemic – which triggered shortages of medications across Africa.

Instead, she and an ever-growing number of healthcare practitioners, regional organisations, and industry analysts back a solution that has been gaining strength for over a decade. They want to build pharma manufacturing capacity on the African continent. 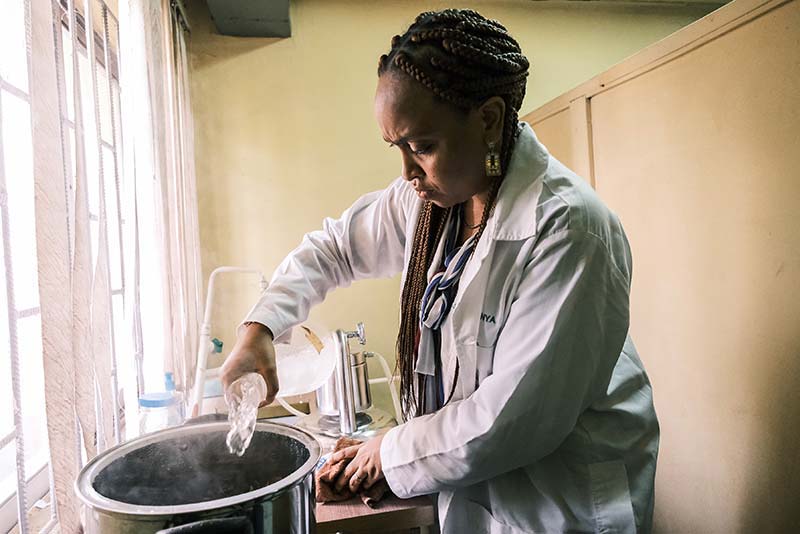 Margaret Ilomuanya at the University of Lagos. Photo by Tom Saater/IFC

“Africa must begin to produce medicines for Africa, with raw material produced in Africa,” she said. “There’s a big risk in relying on elaborate global supply chains in which the supply of many essential and critical drugs is dependent on overseas suppliers. We have the wherewithal to build the local pharmaceutical industry, and we have the hands. We can take it from bench to bedside.”

The potential benefits of Africa-based pharma production have been recognised for years. The Pharmaceutical Manufacturing Plan for Africa, rolled out in 2005 by the African Union Development Agency, created a business plan to boost local pharmaceutical production and improve public health outcomes. Other strategies to promote African pharmaceutical manufacturing include initiatives from the African Medicines Agency and the African Vaccine Regulatory Forum. In late May, 54 African countries co-sponsored a resolution on the local manufacturing of medicines, medical technologies, and vaccines that was presented at the WHO’s World Health Assembly.

What’s different now is that the pandemic has captured the attention of investors who have noted the imbalance between supply and demand in the pharmaceutical sector, said Frannie Leautier, CEO of SouthBridge Investments, a pan-African investment bank. Africa’s lack of essential medicines and active pharmaceutical ingredients (APIs) during the pandemic “had implications on the pharma and health sector in Africa over and above the direct effects of Covid-19,” she said. Since the crisis began, “a lot of thinking about the demand side has been happening at the country and regional level, and also among investors who want to bridge that gap for pharmaceutical products. Investors are looking at Africa with new eyes.”

Local production can “fill the gap”

The scarcity of pharmaceuticals in Africa has been a problem for decades. Roughly half the population of 1.1 billion people lack regular access to even the most essential medicines, according to the WHO. The Covid-19 pandemic has undermined recent progress on access to HIV, malaria and tuberculosis medicines as well as to reproductive, maternal, and newborn treatments and medicines, said Jean-Baptiste Nikiema, a doctor who leads the medicine supply team at the WHO’s regional office in the Republic of Congo.

In-country production of generic drugs could help ensure access and affordability, according to Subir Basak, senior life sciences specialist at IFC. Generic medications are manufactured by pharma companies that receive permission from a major pharmaceutical company to create their own version of the drug, and they are typically less expensive than the original branded medication. Wider availability of generics would offer people affordable treatment choices and lessen African health systems’ vulnerability to supply chain disruptions, Basak said. 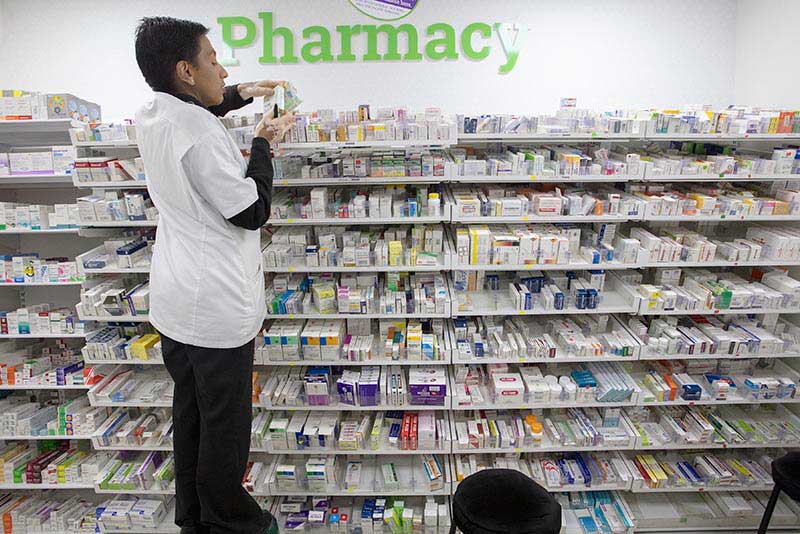 Filling prescriptions for customers at a pharmacy in Nairobi, Kenya. Photo by: Dominic Chavez/IFC (2017)

But Africa has very few local or regional pharma manufacturing companies. There are roughly 375 drug makers, most in North Africa, to serve a population of just over 1.1 billion people. Those in sub-Saharan Africa are clustered largely in nine of 46 countries, a 2019 report from McKinsey noted. (By comparison, according to the report, China and India, each with roughly 1.4 billion in population, have as many as 5,000 and 10,500 drug manufacturers, respectively.)

To establish an environment for API production and local pharma manufacturing in Africa, IFC is working in several countries to “put together the components needed” for a mature pharmaceutical industry. This involves partnering with local and international pharmaceutical companies to co-create projects, identify technical partners, and develop commercially viable projects and financing structures, said Zeynep Kantur, principal investment officer for health projects at IFC. “Covid-19 showed us how vulnerable countries in Africa are, and how local API and pharma facilities can fill a long-term gap,” she said.

Senegal-based Institut Pasteur, the only WHO-certified vaccine site in Africa, is already embarking on a programme to accelerate production of Covid-19 vaccines in Africa. Building capacity there will benefit the region, post-pandemic, because such an effort can be scaled and repurposed to produce other drugs and vaccines needed in the region, according to Kantur. Currently, only 1% of vaccines needed in Africa are produced in Africa.

Notable changes have made the continent a “much more viable market for manufacturing pharmaceutical products than it was a decade ago,” Leautier said. “Many countries now have social security systems and insurance systems that pay for healthcare, so it is a more structured market, with people able to afford longer-term treatments.” That progress, along with Africa’s growing population and the necessity of specialised treatments for diseases that are highly concentrated in Africa, such as waterborne diseases, malaria, tuberculosis, HIV, and AIDS, “make strong arguments in favor of local pharmaceutical manufacturing”.

However, IFC research shows that the African pharma manufacturing facilities now in operation are not at the right stage of maturity to attract investors and scale up production. The elements of success, according to this research, include economies of scale, access to technology and know-how, strong supply and distribution networks, government incentives, and access to investment capital.

Nigeria, the most populous country in Africa and one of the countries with the greatest potential for rapidly scaling up pharmaceutical and API production, is not yet where it needs to be, said Jude Nowokike, vice president and director of the Promoting the Quality of Medicines Plus (PQM+) Programme at USP, a scientific nonprofit organisation focused on building trust in the supply of safe medicines. 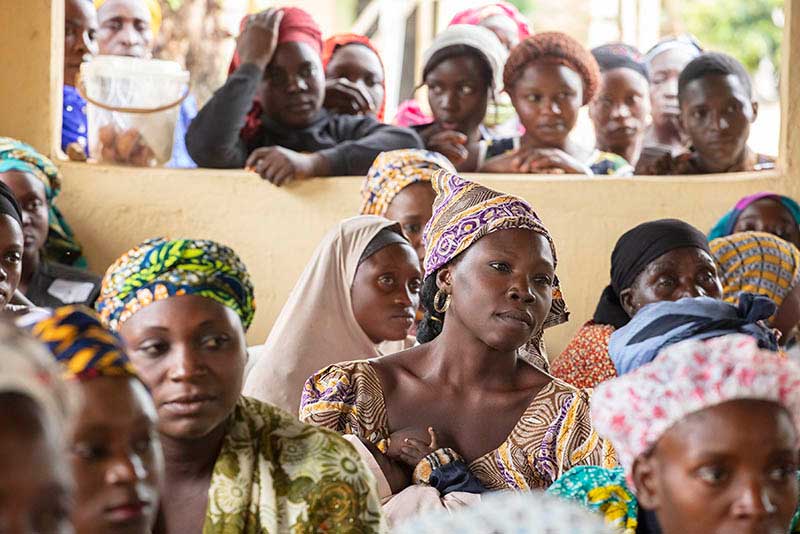 Pharmaceutical manufacturing production in Nigeria currently utilises around 40% of actual installed capacity, Nwokike said. The obstacles, he believes, include challenges in sourcing active pharmaceutical ingredients and raw materials, along with a lack of available investment to scale up operations, modernise equipment, and resolve local infrastructure limitations.

The role of regulation

Regulatory reform is also essential to progress, said Tania Holt, a global public health and pharma expert at McKinsey. Attention to regulatory standards is especially important because Africa accounts for around 42% of the world’s cases of sham drugs.

In addition to contributing to more stable health systems and supporting a domestic manufacturing sector that addresses issues of access and affordability, a stable regulatory environment can attract long-term financial support. Regulatory standards are key to attracting investors “because investors want certainty, and regulation, verification, and certification provide that certainty,” Leautier said. Such standards and accountability mechanisms also “buffer against significant consequences when things go wrong and help deal with emerging risks. Otherwise, it is very difficult to function.”

Multilateral organisations have a “huge role” to play in supporting the development of domestic pharma operations in Africa, Nwokike said. For example, not every country in Africa needs to have the capacity to produce every medication, and multilaterals can help determine which nations and regions can share capacity.

“There should be a reliance on regional neighbours based on their separate strengths, with manufacturing closer to the people who the medicines are serving,” he said. “This is what builds confidence in health systems.”

This article was first published by the IFC. See original here.

91% of people with health savings accounts make this mistake – CNBC